Five Old-School Cereals That Will Satisfy Your Nostalgic Cravings

Post Consumer Brands® is home to over 20 of North America’s most iconic breakfast cereal brands ­– including a handful of nostalgic, old-school cereals you remember from your childhood and love! The great news? These childhood favorites are still available for you and your family to enjoy and can be found online or at your local grocery store.

Take a trip down memory lane with these five old-school cereals that began their historic journey between the 1940s and 1990s – with unique flavors, recognizable packaging, clever commercials and beyond! 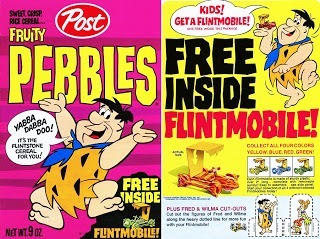 Still filling breakfast bowls as one of our most popular cereals, PEBBLES™ cereal has been an equally delicious and nostalgic cereal for decades – and celebrated its 50th birthday in 2021.

Originally based on the iconic 1960s cartoon TV show, “The Flintstones,” PEBBLES™ cereal was the first brand created based on a media character. Its noteworthy history paired with its sweet and crispy texture has made it a timeless breakfast, snack, and recipe kitchen staple for all age groups.

An ecstatic cereal fan says Fruity PEBBLES™ cereal “still has the same flavor from my childhood that my kids can now enjoy.”

Fruity PEBBLES™ cereal is widely available across the U.S.! Find it in a store near you or online using our store locator. Honeycomb® cereal has lived its legacy as a classic cereal since 1965. Its one-of-a-kind honeycomb shape, sweet and crunchy bite, and catchy jingle have made it a fan favorite for decades! Honeycomb® cereal box including free door signs from the 1970s.

Not only do Honeycomb® cereal fans remember its honey flavor and unforgettable commercials – they also remember its retro cereal box collectibles. In the 1970s, Honeycomb® fans received a free door sign in each box and were encouraged to collect them all.

Thanks to decades of support and dedication from our customers, you can still find Honeycomb® cereal at your local grocery store! Discover where to buy this nostalgic treat. Post® Raisin Bran cereal has served as a breakfast cereal and recipe kitchen staple in many American households since 1942. Cereal fans have proven one thing – this old school classic doesn’t get old!

Each box comes with the sweetness of hundreds of Sun-Maid® raisins and 26g of Whole Grain per serving and is an excellent source of fiber.

Satisfy your Raisin Bran cravings and use our store locator to find it in stores near you.

Golden Crisp® cereal’s legacy has lived on since 1949. Originally named “Happy Jax” and “Sugar Crisp,” this iconic cereal inspired by candy-coated popcorn has been a favorite across the U.S. for over half a century.

Cereal fans still “Can’t get enough of that Golden Crisp®.” You can find it in a store near you by using our cereal locator.

First launched in 1996, Waffle Crisp® cereal recently made a comeback in 2021 due to its continued popularity amongst cereal fans. Its waffle-shaped pieces and buttery, sweet flavor make this cereal a go-to breakfast choice for all ages.

You can find bags of Waffle Crisp® cereal at select Walmart locations. Use our store locator to see where it’s in stock near you!

Craving one of these nostalgic cereals, or another Post® classic like Grape-Nuts® cereal or Honey Ohs!® cereal? Explore all our cereals and products by brand name and nutritional attributes like gluten-free and kosher using our product filter tool!

Celebrate spooky season with a festive treat! The new limited-edition Halloween Fruity PEBBLES™ cereal is now available at grocery stores in the U.S. Better Together Foundation Uplifts People Facing Hardships in Our Communities

At Post, our passions reach beyond just cereal. Learn about Post’s employee-funded giving back foundation, the Better Together Foundation, and causes and organizations the Foundation has supported since 1966.