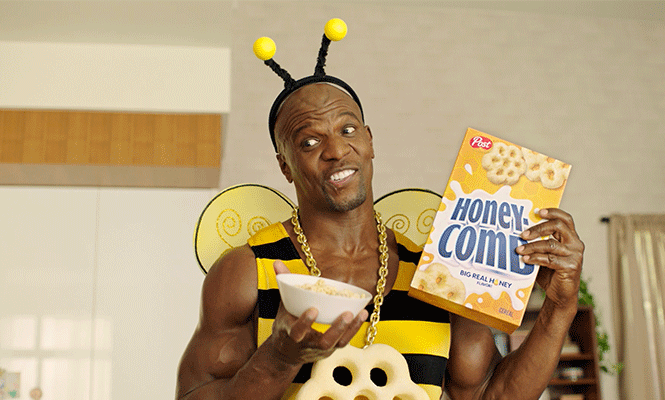 LAKEVILLE, Minn., Feb. 1, 2021 – Known for its big size, big crunch and big honey taste, Honeycomb cereal is launching a new brand campaign starring actor and comedian Terry Crews as a larger-than-life bee character known as “Big Honey.” The campaign features Crews sharing a little straight talk with tweens and teens to inspire and give them confidence to tackle some of the rites of passage and everyday challenges they face growing up.

The new national campaign, which launches this month in the U.S. and Canada, will include TV ads, digital videos and social media content. In one spot titled “Man to Man-Bee Talk,” Crews is seen giving a pep talk to a teen named Kevin to motivate him to get ready for the school day. Another spot, titled “Dance,” shows Crews encouraging a girl to ask that special “him” to the school dance that evening. “With its big shape, crunch and flavor, Honeycomb cereal has always been one of those gateways to growing up, a favorite choice of tweens and teens alike,” said David Bagozzi, vice president of marketing at Post Consumer Brands. “Grounded in the simple truth that tween and teen years come with all kinds of new experiences and challenges, we created the ‘Big Honey’ persona to command kids’ attention and inspire them to ‘bee’ their best in a fun and relatable way.

“We are thrilled to have Terry Crews bring ‘Big Honey’ to life. When we were casting ‘Big Honey,’ we knew Terry would be the perfect choice to deliver the confidence, energy and humor we wanted to see come through in the new spots,” added Bagozzi.

“Honeycomb’s ‘Be Big’ brand idea of championing those small but big moments in life is something that I can get behind,” said Terry Crews. “Every day is an opportunity to ‘bee’ awesome and that starts at breakfast with a bowl of BIG cereal.”

The creative agency behind the new “Big Honey” campaign is Toronto and New York-based OstrichCo. The new TV ads will run in the U.S. on networks popular with tweens and teens, including Discovery Family Channel, Nickelodeon and the Cartoon Network. In addition, the ads will appear in 6- and 15-second video and static formats on digital platforms in the U.S. and Canada, such as YouTube, Instagram, Snapchat and Boomerang. Terry Crews will also be featured as the “Big Honey” character in a series of short videos and stills across Honeycomb’s social channels. For more information on Honeycomb cereal, visit www.honeycombcereal.com in the U.S. and www.postconsumerbrands.ca/brand/honeycomb/ in Canada.

Known for its big, unique honeycomb shape and honey-flavored taste, Honeycomb cereal has been a part of that gateway to growing up for kids since its introduction in 1965. In the United States, the brand’s iconic jingle, “YEAH YEAH YEAH!,” was themed after the 1957 hit, “Honeycomb,” by Jimmie Rodgers. Memorable U.S. Honeycomb campaigns include the Honeycomb Hideout, the Crazy Craving cartoon mascot and the brand’s popular mini state bike license plates promotion. In Canada, Honeycomb cereal is widely known for its iconic logo, red box and bee-man mascot, as well as its “Bee and Boy” campaign. For more information on Honeycomb, visit honeycombcereal.com.

Established in 2018, OstrichCo is a brand, digital innovation and product development studio based out of Toronto and New York City. Ostrich collapses brand design, technology, media and production into one fluid work stream to bring new ideas and innovations to market faster, cost-effectively and with a more compelling connection to human need. // Founding Network Member: By The Network | bythenetwork.com. For more information, visit www.ostrichstudios.com

Post Consumer Brands is a business unit of Post Holdings Inc., formed from the combination of Post Foods and MOM Brands in May 2015. Headquartered in Lakeville, Minn., Post Consumer Brands offers a broad portfolio of products across North America spanning all segments of the category — from iconic household name brands and value ready-to-eat cereals to natural/organic and hot cereal varieties. As a company committed to high standards of quality and to our values, we are driven by one idea: To make better happen every day. For more information about our brands, visit www.postconsumerbrands.com.